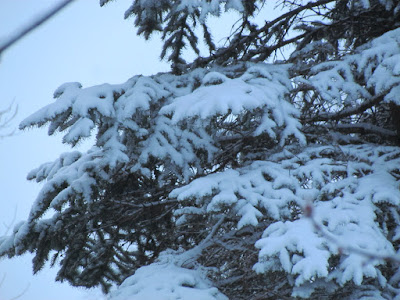 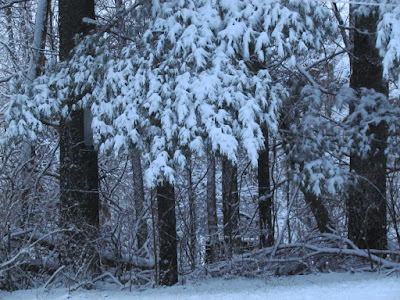 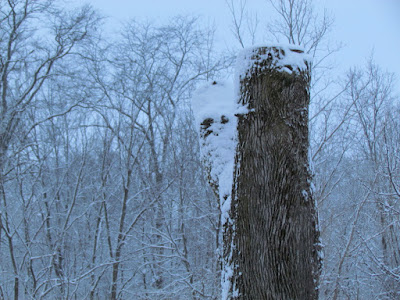 We cut all but this much of one tree over the years, and this will come down for our winter wood.  We'll get a lot from it too. 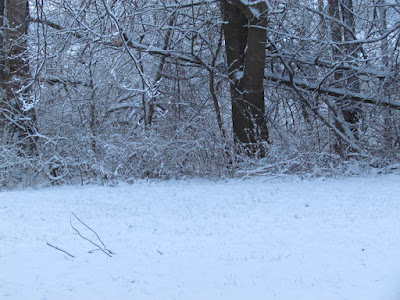 The snow was so beautiful.  It was a fluffy snow with no wind, and gorgeous.  The kind that makes you curl up by the fire, under a blanket and with a book.

We slept in until 7:16am this morning, and with due diligent, but not without a cat alarm clock.  We woke up to a furry feline sliding his paws under our bedroom door and clankity-clankity-clankity.  He was ravenous and wanted fed so badly, he was yanking the door back and forth.

It's a cold -3°F.  First order of business was to feed Tiger, then Romeo, who for the first time was lifting his paws on he first outing outside.  It's too cold for him too.

Next order of business was coffee.  I knew to wait until we both had our coffee before bringing it up in conversation - Russell Crowe.  The rooster is so mean, it's leaving the roost today. 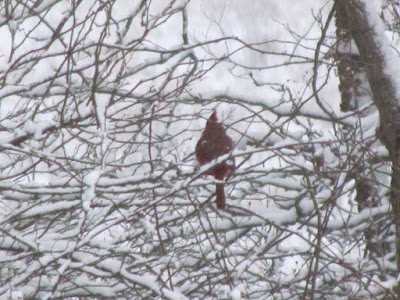 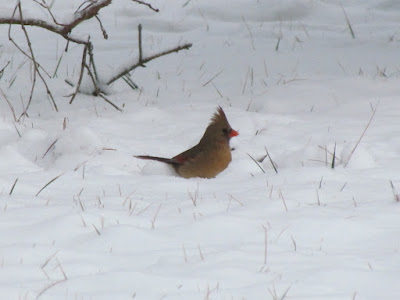 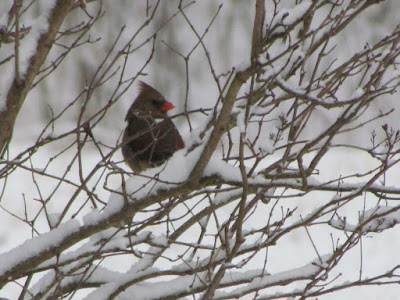 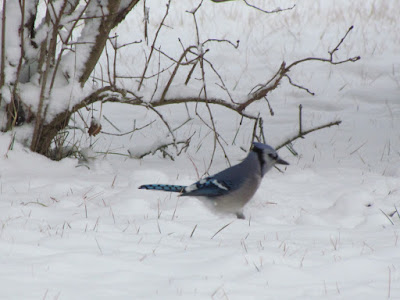 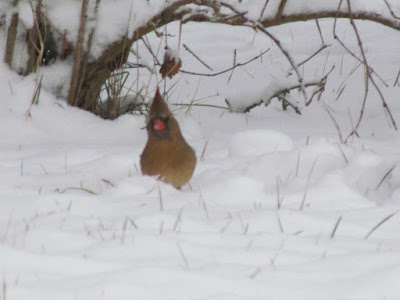 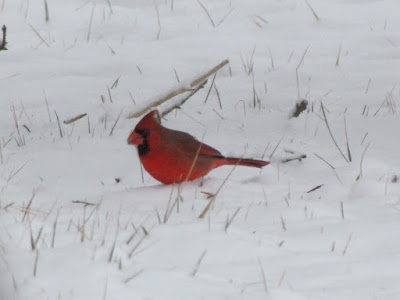 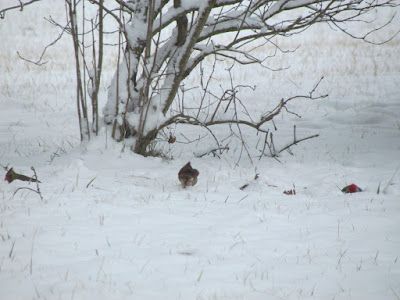 I had over a dozen cardinals visiting again, and other birds this time around.  I tossed seed out for them too.  I think they are very appreciative as well.


Friday was a whirlwind of regional competition for our 18 year-old daughter.  Competition went until 12:30pm with awards promptly at 1:30pm.

We killed some time visiting a local used/new book store.  I found it cute, but overpriced.  I quickly picked a few books of my favorite author (used), and proceeded to the checkout.  There, before me, was my worst nightmare - a lady yapping.  She yapped about books about WWII and would not stop.  Twice she turned around and made comments that she'd be out of my way.  Not so.  I was the only other customer.  Hubby said, "I'm going to go wait in the truck."  I was about to say something rude, when she finally stopped yapping and got out of my way.  Urgh.

We arrived at 12:30pm, only for them to tell us we cannot go in to sit for another half hour.  The program, and the parent letter stated "doors open at 12:30pm. 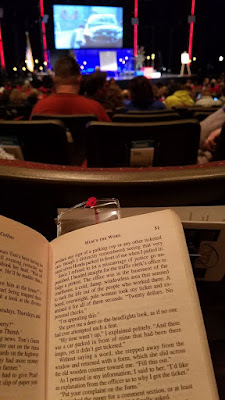 We sat in those uncomfortable seats until almost 2:10pm, in which the awards started.  Thankfully we drove separately, and they go in alphabetical order.  It only took a few minutes for them to get to "Cosmetology."  She won!!  She placed Bronze.  We high-tailed it out of there, congratulated her and left.

She is going to State competition in a few months.  The school is paying for hotel and busing them.  If she places at State (which is difficult), she move on to National, which is held in another state.

We didn't get home until almost 4pm, in which I was undressing and ready for PJ's, only to get a text from Daughter that she wanted to go out to eat to celebrate.

Hubby and I groaned, but went out anyway.  We were so tired from sitting around, we just wanted to retire.  We also got cheated out of Valentine's Day.  Not sure why competition was held on Valentine's Day either.

No wood was cut, no car worked on, and I didn't even get chocolate or bottled adult beverage for Valentine's day.  What's up with that??  Not even a card.  Hmpf.  I'm declaring the weekend a "Valentine's Day Weekend."

We have no plan yet for this weekend, which scares me.  We need plans when it comes to wood cut, and weather so cold it makes transformers blow (which happened last night, but thankfully didn't affect us). I'm going to go down more coffee and see if we can come up with a plan.

Snow and Cold ~ Proud Parents @ Feb 2020 by Kristina at https://pioneerwomanatheart.blogspot.com/

Innovatively written by Kristina at 5:06 AM

CONGRATULATIONS to Daughter - and Parents who endured. Been there; done that.
I knew something was up yesterday when you didn't post. I get my daily motivation from you! I've cleaned out several cabinets but am not done yet! And, now, with today's post that you have NO PLAN, I'm sure today will be a bust for me as well! :) I am envious of your snow. We've had only a slight dusting here in W. TN. Are you in Ohio? We are planning an Ohio trip to visit presidential homes (that's our Bucket List - to see all the presidential sites) and to see Cuyahoga Valley National Park. Hope you are able to accomplish great things today!

What is the fate of Russell Crowe …? Not quite sure what "out of the roost" means? Hope it's not the pot! Have a restful day-after Valentine's weekend and cuddle with these temps.

Congrats to your daughter on her competition win! And the things we do for our kids. :)

M Meyers, yes we are in Ohio, and it's very cold today. Glad I could be your motivation.

Mother Em, Hubby doesn't have the courage to get out his pellet gun, and I'm not in the mood to stew him either (too much work for such little meat). He is tossing him in the other pen with the other roosters and he hopes the nice ones straighten out his attitude.

Congratulations for your daughter's success. Your "ordeal" reminded me of Eistedfodd competitions here in Wales. Children and us had to be there for 8 a.m. but it might be 6 p.m. before your little darling got to do their piece and then you had to wait and see if they had any success. I used to take my x-stitch with me . . . It was soul-destroying when you listened to 60 kids all murdering the same piece of music!

As for the Cardinals, I had a Facebook post about the different varieties today - bright yellow ones from South America, and Blue Northern Cardinals were amongst them.

Keep warm and I hope you had a proper Valentine's Day weekend!

Congratulations to your daughter. Beautiful photos of the birds and the snow, so very pretty. Hope you manage to get the wood cut.

Thank you Bovey Belle and mamasmercantile 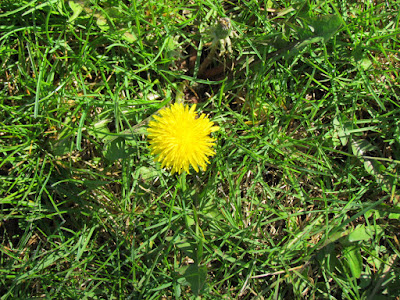