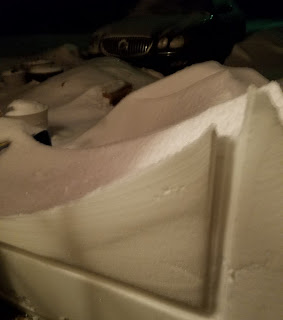 Not good.  Opened the door to a 2 foot drift blocking my way, and the barn cat's food box buried.

Yesterday, before the roads got bad, we drove clothing and items to our Youngest at her work.  She stayed in town over night with my Mom.

Daughter K works in the opposite direction, and I begged her to get off work early.  The roads were horrible.  She did and barely got into our giant U-shaped driveway.  She said some drifts on the road were taller than her car.

Husband tried to plow thru the drifts with the truck to get to work.  Truck is stuck and awaiting to see if the boys can plow us out.

We are at the highest level on our road emergency plan.  There is no one on the road right now.  It's very bad.  The worst part?  If we can't get the snow plowed, we have to hand shovel before it goes to a very cold temp tonight (-7°F).

I officially can say I dislike winter.  It's 15, but feels like 2°F.  Not a good time to say we wished the wheel horse was fixed.

Guess I'm getting some hot coffee and getting my full body winter coverings on and heading out to shovel off the 2 foot drive to just get out of the house.  Then it's back out to get at least one side of the drive shoveled.  Mail won't deliver if the snow plows buried the mailbox access.  So there is that too, and it's heavy snow there.

Oh, and it's still snowing, so there is that too.  We don't own anything to plow, other than the wheel horse.  I did find numbers to two people in our country town who plow, but want too much.  I totally sigh over these decisions.  Should'a, could'a, would'a.....fix the darn wheel horse come spring.

Innovatively written by Kristina at 3:41 AM

Sounds like you all are really getting the snow! Am thinking about you and praying safety and protection over you and your family. Stay warm!

Beside a babbling brook... said...

We have been shoveling also but so far are still able to get out of the drive. Keep warm!

Beside a babbling brook....right? ugh.

Lady Locust, we literally have no wind block out here in the boonies. Drifting is always an issue with winter wind and snow.

The process of this spring jelly is so intriguing.  It starts out the color of this (above). Wild Violet Jelly 2 cups freshly picked wi... 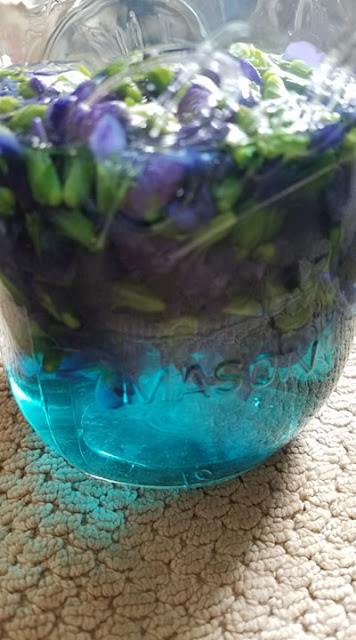