Welcome to the Jungle! Homemaking at it's Best ~ Fox and the Chickens ~ Garden Provides

I decided to take photos after all.  A little humor for you today. I was outside taking photos of Youngest on her 2nd day of school, and just started to laugh.

You have to have humor to see this, and deal with this (all things considered).

This doesn't even include the jungle of a vegetable garden we have either.

Grab a cup of java/tea or your favorite beverage.  Things just got interesting.... 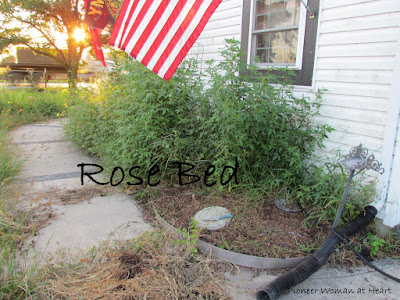 My Grad daughter started to weed this and got frustrated with the 5-6 foot weeds.  She quickly abandoned it, ha ha ha!  This is where many of my rose bushes are.  Somewhere in there. 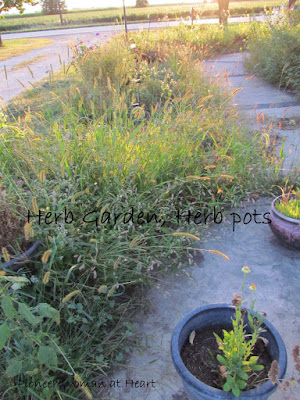 My beautifully landscaped herb garden is now is disarray.  I can still locate my herbs, and have weeded the left side of this, but oh my.  I need rain to pull the 5 foot foxtail grass out of it. 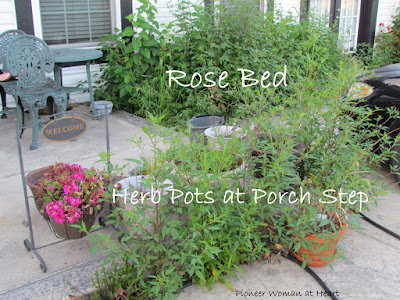 The side porch step.  Ha.  Now these came in handy. I'll explain later.  These weeds are 6 feet tall.  There are roses in that mess of weeds, and I think a tree is growing in there too.  The step is flourishing in weeds that are hiding my pots of herbs, and they are weeds that are not any good to me this time of year.

My flower pots are all looking terrible, but I am not going to let it stress me out.  I'll weed when I can, and when the Good Lord provides rain.  I don't want to spend every day watering it down just to weed.  The worst is the mail carrier and bus driver have to look at it, but they understand too.  It sort of has a "lush" green look to it, ha ha!  Unless I get any volunteers to show up, it's the way it has to be.  Hubby works full time, Grad Daughter has a job now, Youngest is back in school.... 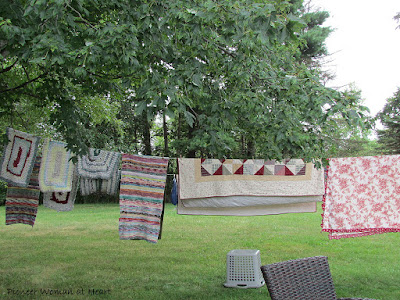 In the meantime yesterday, floors were swept and mopped, house dusted, trash emptied, dishes washed, counters and tables cleaned and sanitized, mail sorted, school forms filled out, carpets vacuumed, animals tended to, and emails read.  Tomatoes picked.  Bill organizer filled out for August.  Rugs washed, blankets washed for winter, and drawers measured for future plastic storage bags (spider free).  Shopping list written out, and a list of what I need to pick up from the produce stand (to complete what I harvested).  Library items were picked up and returned (delegated).

Question to those who have used "spider traps."  What's the best brand?  I see so many options, and even ones specifically for brown recluse, but I'd like an all-purpose spider trap.  We get tons of wolf, garden and other spiders, and I would like to get some set before they all try to move in.

The update on the tall weeds.  About 3:30pm, I glanced out at the chicken run.  It's a daily habit to check on things outside, because 2-3 hens have been getting out of the fence.  I've been too lackadaisical too find where they are getting out.  The kids and I were in the kitchen just chatting.  I screamed, "FOX!"  and ran for my choice of artillery.  He was smack dab next to the run fence, with hens nearby.  By the time I got outside (and I was moving fast), safety off, gun drawn, that &*$#* was next to my garage.  He/she moved up to come after two hens that were on the loose.  He saw me and I unloaded, but missed the dang thing (so, so mad about that).  I retreated to the door and found one blondie curled up in a tight hiding spot on the porch.  I went to put her in the coop and she ran right into the tall weeds around the house.  We chased her for 1 1/2 hours.  Leaving her in the weeds.  She was so afraid.  I feared she would have a heart attack.

I did a head count, a look-see in the run, and just about cried.  It's the hardest thing for me to deal with, but we deal with it.  We've been pretty lucky so far raising hens.  So....I was missing a barred rock and blondie, minus many feathers and scared to death.  We locked up the coop and left the barn door open. Hubby went to see if I hit the dang predator, but couldn't find evidence.

We ran to town, and when we pulled in, my barred rock came slowly walking out of the 6 feet weeds by the side door.  It's funny how animals come to the side door for help (goats did it too). Both hens came to the door.  They were hiding well.  We got the barred rock in, and left the barn open.  Late in the evening, while taking dogs out, Hubby went into the barn and found our skinny, featherless blondie, sitting up next to the coop.  She was thankfully put in for the night.

WHEW!  All hennies accounted for, and fox is still on the loose.  The dogs smell it, and buy the amount of ammo I used, you'd think it would have moved on. Hubby unloaded ammo later just to make sure too.  Today, I'll be on fox patrol.  My aim will be spot on if needed.  Artillery at arms length too. NO way am I losing a hen to that &%*$* fox.  This one is younger than the one who visited us last year.  It's fast. It's hungry, and it smells my hens.

It's just that one part of homesteading I have to deal with, and I'm glad I can shoot.  If you can't shoot, you might as well say sayonara to your flock.  Unless you cage them all their lives.

Either way, fox are usually "sly" and I barely get a glimpse in the very early hours or late hours.  This one was smack dab in the yard, middle of the day.  It must have been very hungry.  The nuisance neighbor of ours, also has free range hens.  I'm wondering if he's lost any now.

Tune in tomorrow to see what the garden provided yesterday.
Innovatively written by Kristina at 5:08 AM

When we have a predator around, I try to remember that they were here before us, we moved in on their territory. But, just the same, I can't bring myself to lose any of our domesticated livestock that feed us and in whom we've invested time and money. It's hard to destroy a beautiful animal like a fox because as you say, he's hungry and just doing what comes naturally. Same with hawks. Even with a large fenced in poultry yard it's nearly impossible to protect our birds . . . the hawks, too, are only seeking food. Such a dilemma.

You get him, Annie Oakley! LOL! My biggest problem is the hawk population. And I don't think I'm allowed to nail one. I try to put areas of shelter around, so the hens have somewhere to hide. It's a little harder in the winter. Your weeds look just like mine!

Mama Pea, I hear ya. The one that came around last year was very old looking. King ran him off, but he came back again. After a while he left when I wouldn't let my hens out. This one that visited this year, may be a problem.

Susan, I get a hawk every spring and fall, but watch out for him. When he gives up, he leaves the area. Yeah, we can't shoot them here either, but my hens are too big for him. He only goes after sick looking ones (ones molting and no feathers). Had to laugh about the comment on the weeds. I have them so tall, my compost container is under weeds, ha ha!

It's just nature although you don't want to lose any of your hens....the fox needs to eat too and he's only doing what's natural. Glad they are all okay. My yard looks like yours although I did spray the poison ivy and it is all dead now so now I have dead weeds out there instead of green ones! LOL!

Sam I Am, I have poison ivy everywhere yet. The fox has not returned today. Thankfully.

I've used Trapper insect traps (0n amazon) and the larger Trappers, also on amazon. We get spiders, some weird wormy things, small scorpions, and the occasional mouse. They are just cardboard with sticky stuff covered by a peel-off plastic that is removed when you bend the trap into shape. They work well. We live in a log house surrounded by woods, and we heat with wood, which means bugs come inside with the firewood.

Thank you Sue Legg. We bring in wood too, so this is very helpful. I want to make sure no one gets bit by a recluse here again. Again, thank you!

I finally got a day to make a batch of homemade "neosporin" and some lemon balm lip balm.  The infused oil recipe for the "... 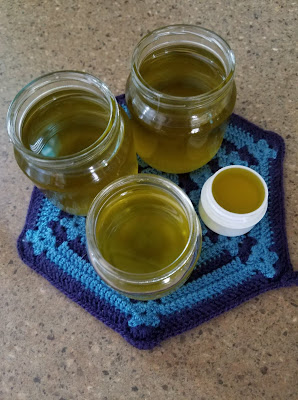