Yeah, you read the title right!  My side of the family didn't get together in December like normal people.  Then again, what is normal?

Thursday afternoon, our 18 year-old daughter drove to one of the "Big Cities" and had a 2nd job interview.  She wanted a new phone, so while she was there, she stopped at the area mall and phone store there.

They had a rookie employee, and the boss.  The boss left, after trying to push sales onto her first.

Next, the guy had no clue what he was doing.  After almost five hours, with us trying to call and text her in panic as to where she was, she came in the house crying like a hot mess.  A serious hot mess.


He not only had her pay $1.15 for her phone, but sent her home with no service.  She had no GPS to guide on unfamiliar roads to get back home, and no service to call us.  It was dark and raining.

I tried calling the store. No answer.

Friday morning, I had rolls to divide and let rise, so I did that first, then we took off on our unexpected and unnecessary drive.  We had to take her mess of a car too.  Mine is still out of business (brakes).  I grabbed a crochet order and worked on that on the way there, giving Daughter directions, and a quicker and easier way to get there.

About 2 hours later, the phone was fixed, service on, Mom signed her "John Hancock" to verify an account holder was present, and we headed back home.  What an ordeal.  Then I find out the guy flirted with her on Thursday night, told her he was a bouncer in the other big city, and could "get her in."

Momma bear kicked in.  This guy was reported, not by me, but by our daughter.  Then this guy actually texted her, because he asked her for her phone number at the phone store, and said he was sorry.  The gawl of this guy.  He texted her while we were there on Friday.  I let the guy working there know too.  Just inappropriate.

Back home, the rolls were baked, and like a mad woman I boiled the sweet potato, rolled the pie crust and popped the pie into the oven just in time to bake it before Hubby arrived home.

We had date night planned for our late Valentine's dinner, because he was sick on Valentine's Day.  We really needed a night to ourselves too.

But, one daughter left, the other was eating with friends, and had not taken the house key I just had made, and explained to the both of them - keep it with you at ALL times.  Sigh....

We got our date night, but what a mess of a day.  Crazy.

Saturday was the big gathering.  Although it was our very late "Christmas" gathering, I didn't bake candy and cookies.  I'm so done with that season. 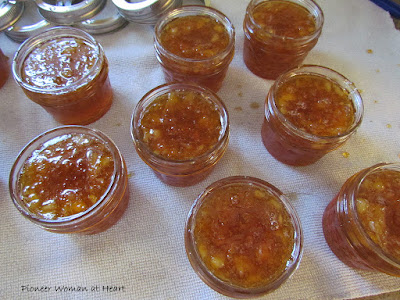 (Jars of Carrot Cake Jam, made with homegrown carrots and homegrown pear). 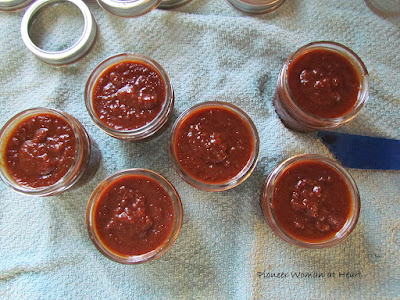 I gifted everyone carrot cake jam and cherry-bourbon BBQ sauce.

When we left from that gathering, we took leftover rolls and dip to Hubby's family "fish fry."  Yeah, I was tired.

Sunday, I crocheted like a mad woman, losing out an entire Saturday of working in the afghan.  We also took our Army daughter out for a belated birthday dinner, but was so worth taking the time to do it.  She very much enjoyed it.

It snowed Saturday night, but it's raining today and warming up to the mid 40's.  I apologize for the long post.  I've been "MIA" due to the busy, entertainment packed weekend.  I hate to tell Hubby, but I can't be running around to every invitation lately.  It'll be okay to say no once in a while.  Right?


Innovatively written by Kristina at 7:47 AM

Now that was a busy weekend and yes you are so right it is alright to say no occasionally. Love your food gifts, so thoughtful and made with love.

You're darn tootin' you have the right to say "no" to some invitations. You HAVE to or you're going to run yourself right into the ground. Whadda weekend. Would have taken me a week just to recover from it!

That kid’s boss should be reported, too. He’s obviously not doing HIS job. So glad your daughter got home safely, poor kid. I vote in favor of saying ‘no’ whenever you feel like it - you need a break!

Mama Pea, it may take all week to recover, ha ha!

Susan, you are right about the boss. Yep. Sayin' no more often or I am gonna get run down.

WE have no trouble saying "no" as one of our first words as a child and then it gets drilled out of us....especially women! Good golly, glad you had some fun but you can't truly enjoy yourself if you're exhausted. Take care! 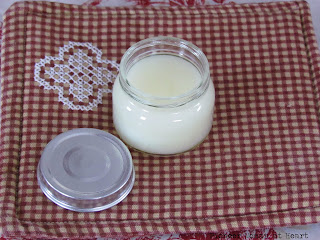