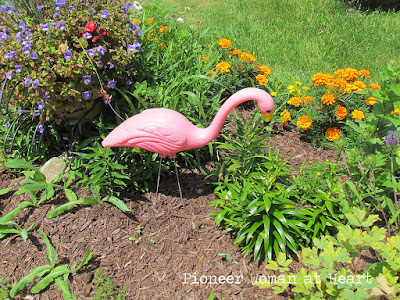 My garden has been high jacked by a cleaning frenzy going on in my garage.  Obviously the kids have compromised the flower bed with one very pink, plastic, flamingo.  They think they are so funny.

The story behind having this flamingo (we had two, but I have no idea where the other one went), is that we had a plan for them.

My younger brother had a birthday coming up, and he despises "yard trash."  Basically, anything that is not growing naturally, and is put out for yard decorations.


We had planned to buy a few more if we could find them, and sneak over to my brother's house and "flamingo" his yard for his birthday.

Now that I see how the flamingo looks, we may just collect a few more, and maybe a bird bath for them too.  It may just happen one of these years.
Innovatively written by Kristina at 5:10 AM

One of those ugly things appeared in our yard once but we shot it. ;o)

Ha ha ha ha! Thanks for the laugh Mama Pea!

Ha ha ha... In our town the dear flamingos get stolen and found in other parts of the town. It has become a real event...

Ha! That's funny... Incidentally the man that created this mid mod yard art... Recently passed. I understand his flamingos gave him a lucrative nest egg... If you don't mind the pun.

Lady Jane, maybe if I put it closer to the road someone will take him, ha ha!

Patricia, if I could only come up with a good money maker like that, ha ha!

A place nearby used to rent them out for birthdays. If you were turning say 50, they would decorate your yard with 50 pink flamingos. Wonder what happened to them, haven't seen a pink bird in quite awhile.

Liz, it's hard to find them around here anymore. I bought the two I had for under $5 a few years ago.

Years ago, we snuck over to my youngest sister's house in a nicer subdivision in a nicer area of town after dark and put several small flamingos near the edge of the street in her yard. Her house is on a hill with a natural tree area between it and the curb, and we were thinking she wouldn't see them until she left to go to work, after several of her neighbors had already driven by on their way to work, had seen them there and got a laugh out of it at her expense.
Well, turned out she liked 'em and put them in her flower bed up closer to her front porch, so our little joke on her turned out to be a joke on us. LOL
Me, I like yard trash and have many many birdhouses including one of a haunted house, a lighthouse and a couple of churches, along with an elves' village, a toad's house (though no toad has lived in it yet), several mushroom houses and even a miniature camper/trailer park set up in the yard. I also have many gnomes and animals - rabbits, squirrels, chipmunks, a frog, a snail, a turtle and even a buffalo. There's also an arbor filled with solar lanterns that lights up the arbor at night along with a solar light up cross that glows in the garden at night. Bro Tom makes me put them all in natural areas though so he doesn't have to move them all when he mows the grass. I'm just glad he puts up with my child-like imagination.
God bless.
RB
<><

RB, that is a funny story. 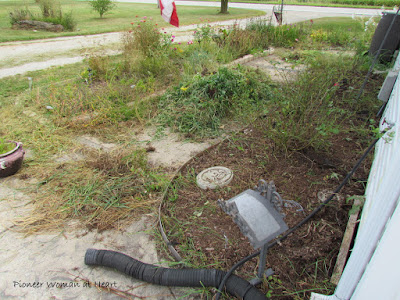